Considering their 20th century history, you’d be forgiven for thinking that the Vietnamese people don’t have a whole lot to smile about. But how wrong you’d be! Smiling is the national pastime here, and these aren’t the cheesy grins of those intent on parting you from your holiday spending money, but genuinely open and friendly ones. They’d be smiling whether you were here or not. But now that you are here, expect to be treated by total strangers like an old and cherished friend, long since presumed missing in action on life’s hectic stage.

Vietnam bears the marks of a whole jumble of influences, from ancient SE Asian empires to the French colonists of more recent times. They’ve all left their marks on the culture and landscapes of this charming country which winds down the edges of the peninsula like a sinuous snake. Antique imperial ruins rub shoulders with abandoned colonial buildings, palm trees nod over sandy beaches as they have done for millennia and life goes on with a big smile on its face..

From the busy Mekong Delta and bustling commercial centre of Saigon in the south, through the tropical beaches and serene rice fields of the central district and on to the cosmopolitan capital of Saigon in the north, Vietnam is a rich tapestry of varied landscapes and cultural influences. Despite recent development it is still largely pristine and untouched, and ideal for a short or long vacation if you’re looking for something different and exotic for a change.

Hanoi is the bustling capital of Vietnam, located in the north and with its own international airport. At its centre is Hoan Kiem Lake. The name is a reminder of Vietnam’s glorious past, as it means ‘returned sword’ and refers to an ancient battle in which King Le Loi drove out an invading Chinese army.  Book a hotel in Hanoi and see wonderful mix of old and new, with boulevards lined with French colonial mansions, stately pagodas and old fountains giving it a distinctly European feel.

The Mekong Delta down south is a region of outstanding natural beauty. This is where the great Mekong River empties itself into the sea, creating a rich area of silt which is ideal for rice fields, the source of a full half of Vietnam’s agricultural production. Life here revolves completely around the river, and it’s a good place to take a slow and winding boat journey upstream through the magical countryside of jungle and rice fields with a mountain backdrop.

Ancient Vietnam is personified in the Thien Mu Pagoda in Hue, the tallest of its kind in the country. Pagodas are a ubiquitous feature of Vietnam and they’re so much more cheerful than cathedrals and mosques. Even the stone demons that stick their heads out of the crenulations are dementedly grinning at you as you pass, and you can’t help thinking that everyone in this country is sharing the same secret joke, but definitely not one held at your expense. 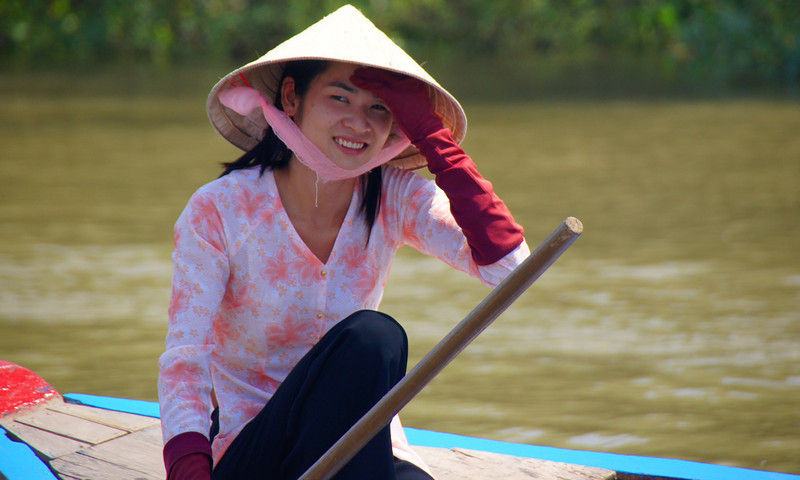 David Elliott is a freelance writer who loves to travel, especially in Europe and Turkey. He’s spent most of his adult life in a state of restless excitement but recently decided to settle in North London. He gets away whenever he can to immerse himself in foreign cultures and lap up the history of great cities.